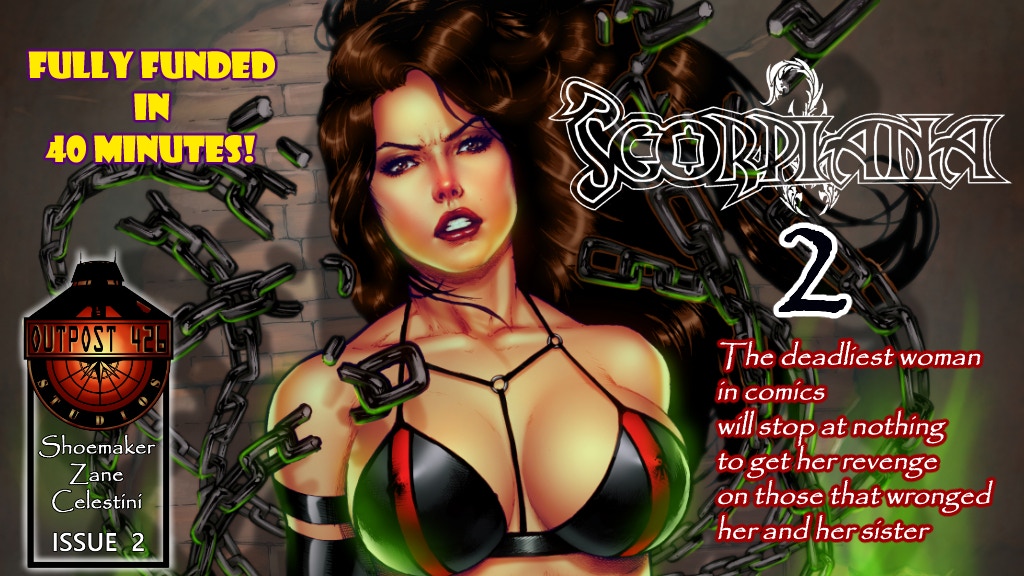 Scorpiana 2: The Quest for Revenge Continues!

The second issue starring the deadliest woman in comics, Scorpiana!

Latest Updates from Our Project:

Here's another great campaign that fans of Scorpiana should hear about. It's Le Fay #3 - If Jessica Jones was a Fay sorceress, and I've pledged and enjoyed the story so far. This is a modern take on the classic villain from Arthurian legend brought into the present in an urban setting. Ever wonder what Jessica Jones would be like if she happened to be a powerful sorceress? That's Le Fay in a nutshell. This is a 32-page full-color comic and the third issue of a series. It's in the urban fantasy noir genre and intended for mature readers. Swing by their campaign and check them out!

Hey, everyone! Thanks so much for coming aboard, and for the incredible success this issue is seeing thus far. We are closing in on unlocking the next round of stretch goal items, this time the first trading card! After that comes the "Bombs Away" sticker by artist nonpareil Stef Wilson! So tell your family! Tell your friends! Tell your hairdresser! Tell random people on the street! Let's keep this train chugging along!

Check it out! Molly Schofield has an awesome, action-packed cyberpunk Kickstarter going called Minxx. It looks great and has a fantastic number of variants available. Take a gander at it -- you know you want to!

Scorpiana fans - you did it!  $10k in 25 hours and you have unlocked a 3rd stretch goal!  The Outpost 426 Studios logo sticker!  And with 29 days to go - there are lots more to unlock, announcements to be made and new items to offer so tune in to see!

Every backer gets the digital smart phone wallpaper!!  Thanks to all of you - you've earned 2 free rewards so far and are surging ahead for the third stretch goal - an Outpost 426 die cut sticker!